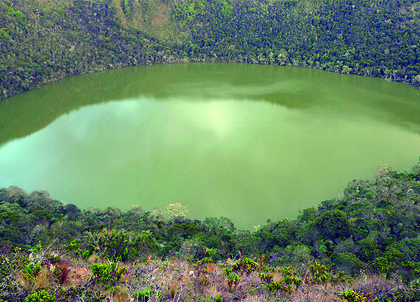 To prove that a legend transcended the sphere of the fantastic, all that needs to be done is to leave Bogotá, by the Autopista Norte or the road to La Calera, and visit the sacred Guatavita Lake, the site of the legend of El Dorado, the legend that attracted the Spanish conquistadors to this land in the sixteenth century.

The narrators of these events and the setting where they took place are located just 75 km, or an hour away, from the Colombian capital. Besides the famous legend, there are several other reasons for considering this tour of the savanna of Bogotá: splendid scenery right at the edge of the road, picturesque towns, and ecological reserves that release oxygen into the environment.

The sacred lake of Guatavita was the ceremonial site where the Indians worshipped Chie, the goddess of water

Before pointing out the details of the story that took place on the waters of the lake, it is worth explaining that the present municipality of Guatavita, is a 42-year-old architectural complex created to replace the old town, which was submerged by the Tominé Reservoir, a masterly work of infrastructure that generates electric power for nearby localities and a substantial amount of Bogota’s water. It is also a stage for sports like sailing and water skiing.

Note that the name Guatavita has been used for three different settings. From now on, we will take care to point out to which one we are referring to. Guatavita, the old town, now covered by the reservoir, used to lie on the slopes of the hill by the name of Montecillo. It was the religious capital of the ancient Muisca people and a site for the production of fine metalwork.

Guatavita, the sacred lake, belongs geographically and legally to the municipality of Sesquilé. It used to be the ceremonial site where the Indians worshipped Chie, the goddess of water, during lavish ceremonies that gave rise to the legend of El Dorado. According to the legend, the Muisca Indian chief would arrive, covered with dust, on a wooden raft, with four of his priests and the treasures collected in his community. After throwing the treasures into the lake as a symbol of adoration, he would immerse himself in the water. For the natives, the value of gold was not economic, but a means to come closer to their gods. 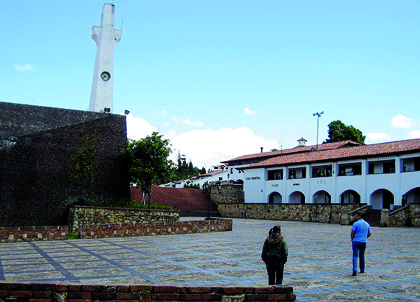 The story came to the ears of the Spaniards, who organized expeditions to take the precious jewels our ancestors had ingeniously created over the course of many years. In fact, it is said that during one of the first lootings ordered by Phillip II, over fourteen loads of gold were taken.

The Spaniards attempted to drain the lake several times. The high cost of these expeditions made them give up, but not after obtaining the best part of the booty. The gold they took was a lot and very heavy; very little has been recovered.

The legend of El Dorado tells that the Muisca chief would arrive at the lake on a wooden raft with four of his priests. After being covered in gold, he would immerse himself in the water with treasures offered in adoration

Guatavita, the new town built in the sixties, is an architectural heritage site classified in the categories of family and civil buildings. Family buildings are represented by symmetrically designed houses with white walls and ceramic tile roofs; the second category, by the Office of the Mayor, the House of Culture, 17 small squares, Lovers’ Bridge, the central square, the handicrafts center, and La Cacica fountain – all of the above connected by flagstone and cobblestone streets.

Practically everything built and sculpted in the new Guatavita has to do with the quasi-true legend of El Dorado. During a leisurely stroll, it is easy to find data that brings visitors closer to the facts, whether because they are inscribed in buildings or written in documents, or because there are well-informed guides and locals who are happy to transmit information on the events.

A trip to Guatativa implies visiting each of the three locations. It is a charming experience that involves engaging in nautical sports on the reservoir, bird watching and ecological hikes on paths near the lake, and a stroll through the new Guatavita, where history is guarded side by side with the work of contemporary artisans who are true masters of clay and virgin wool. 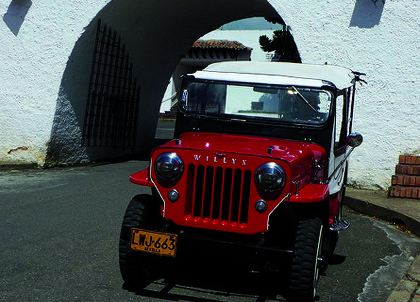 The legend is a historical fact of great magnitude that represents much of what we Colombians are and have, to the point that on the other side of the world, someone who knows nothing about Colombia may forget what or where it is, while being able to describe and remember the legend in detail and how the Indians developed techniques like lost wax to give shape to the gold they mined and later sank into the lake.

At present, some of the treasures of El Dorado are part of collections that the Bank of Republic has recovered in the course of more than sixty years and exhibits in the halls of the Gold Museum in Bogotá; among them, the renowned Muisca Raft that stages the pinnacle of Indian rites on the waters of Guatavita. 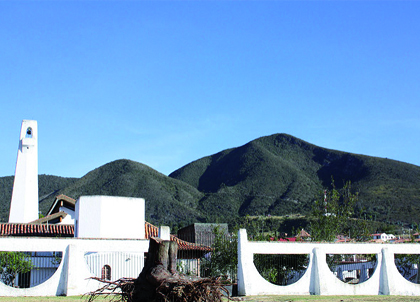 The old village of Guatavita

Thus, we have that the ingenuity of Muisca ancestors to work gold and turn it into sacred figures is true, just as the looting of many treasures by the conquistadors. And the recovery of priceless pieces is evident. There is Guatavita, the present town - white, colonial, and a tourist attraction. The old village of Guatavita is submerged in the waters of the Tominé Reservoir. It came to a halt, but it is still there, while the round, greenish lake is enclosed by mountains and protected by the environmental authorities for the enjoyment of hikers.

Perhaps the legend will remain due to the impossibility to prove whether any Muisca treasures remain at the muddy bottom of the lake. What a lot of Indian wisdom! What an ambition for conquering! But let’s leave the lake still; and let’s leave the legend still. 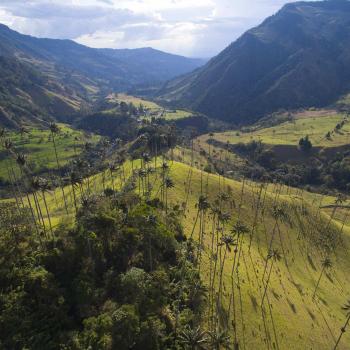