A getaway in the Colombian Pacific 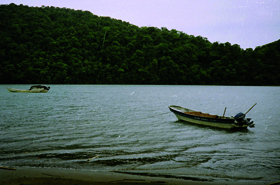 If you prefer to share the beach with sea dollars washed by the sea and the occasional group of hurried crabs rather than with hordes of families on vacation, with shows put on by the stars in the sky rather than neon lights, with the roar of waves rather than the din of traffic at rush time, theColombian Pacific coast could be the perfect place for a getaway.

Short flights from Medellín to the coastal villages of Bahía Solano and Nuquí will fly you over miles and miles of dense tropical jungle. It is surprisingly easy to discover this intact paradise in the department of Chocó, one of the most remote regions in Colombia.

About half an hour from Bahía Solano lies the fishing village of El Valle, the place where over thirty years ago Elvira Vásquez fell in love with the calm and isolation of this part of Colombia. She lived in Medellín, but was searching for a place where she could spend long weekends and vacations with her children, a place where time would not be measured by the clock but by the ebb and flow of the tide.

When she was shown a beach called “El Almejal”, near a coconut grove and at the foot of the rainforest, she knew. That was the place. Today “Doña Elvira”, as she is known by the inhabitants, and her son, César, have around a dozen comfortable cabins for rent – they do not plan to expand much more – each with a hammock hanging in the front porch, the best place for the indispensable afternoon siesta.

More than providing a getaway in an unexplored part of Colombia, the friendly owners of El Almejal and El Cantil want to foster in their guests an appreciation for the environment supported by the conscientious economic development of the region. 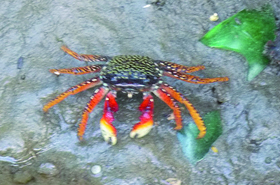 So, what is there to do when we are away from it all in this remote region of the Pacific? Well, from July to October, you can marvel at the humpback whales, the planet’s largest creatures.

Every year at this time, these 40-ton mammals migrate from the polar waters of Argentina and Chile to the warm Colombian waters for the purpose of giving birth to their young. The two refuges offer daily excursions to see the whales – truly a memorable experience.

The humpback whales are the stars of the show, yet they share the stage with various other co-stars that can also be observed. Out in El Almejal, César directs early morning bird watching walks like the one described by an Austrian visitor as “marvelous meditation in the jungle”. You will be surprised at the diversity of birds there is to see – and hear – only a few feet from your cabin. If you seek a true physical challenge, the path behind El Cantil will eventually take you to the “frog mountain”. And if you look hard enough, you will see impressive red and green frogs under the leaves. 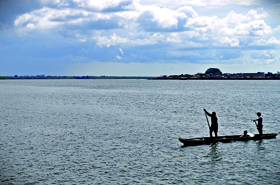 Whales, frogs, and birds. What is missing? Oh, yes, baby turtles! Commercial fishing of shrimp and the harvesting of their eggs have turned the Ridley turtles of the Pacific into an endangered species. As part of its commitment to the environment, El Almejal operates the only private turtle conservation project in Colombia. It is a year round effort supported in part by their “Adopt a turtle” program. With luck, you may witness the release of young, intrepid turtles slowly finding their way to the ocean. It is interesting to note that turtles have a keen sense of smell and that females know how to return 15 years later to exactly the same place lay their eggs.

Undoubtedly, nature is the main attraction for all those who visit the Colombian Pacific. However, from playing soccer on the beach with local children to looking at heated domino matches with the village veterans and everything in between, what will remain for the longest time in your memory after your trip are the incredibly warm and friendly people you will have met.

The locals, most of Afro-Colombian ancestry, will always greet you with a smile and kind words. English speakers are scarce, but the people are extremely tolerant and indulgent with those whose Spanish may be limited to “una cerveza, por favor” (a beer, please). Visitación, a worker for several years at El Almejal Restaurant, confesses with a smile that she sometimes has to use sign language with foreign guests. 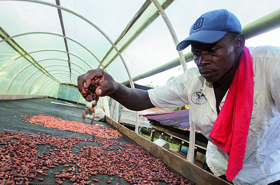 Smart tourism is creating opportunities for the region’s people. In the village of Joví, for example, not far from El Cantil, members of the community organize canoe trips on the river’s crystalline waters. The earnings obtained from this Colombian version of a Venetian gondola benefit the residents of Joví. A similar group takes tourists to the hot springs at the village of Termales for a modest price.

There is no better way to end the day that by watching the sun disappear on the Pacific while drinking a Poker beer – the only brand in town. After another delicious dinner of red snapper or tuna and making small talk with your travel companions on the front porch of your cabin, it is eight thirty - time to go to bed. As you get under your mosquito net, you smile and try to guess what day of the week tomorrow will be.