Bogotá
19 °C
This block is broken or missing. You may be missing content or you might need to enable the original module. 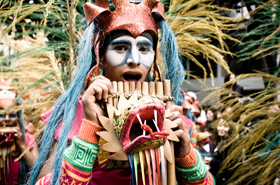 The Ibero-American Theater Festival of Bogotá is a major cultural event in Colombia and one of the largest performing arts festivals in the whole world. It takes place every other year in the Colombian capital and brings together the most important theater companies from five continents. For seventeen days, the city becomes the setting for colorful parades; Bogotá dresses up for the party and becomes a genuine Theater City.

Every two years, Bogotá becomes the largest theatrical stage in the world.

In the course of seventeen days, Colombians and visitors from all over the world come to Bogotá to massively attend the theater halls and fill the streets of the capital, enjoying an unparalleled theater adventure.

The festival offers the most complete panorama of performing arts. Aside from classical works, it is a showcase of dance, circus, music, puppetry, pantomime, performance art, and even concerts, many of which take place simultaneously in Bogota’s halls and streets.

Additionally, there are specialized workshops and lectures by maestros of the scenic arts from five continents.

Origins of the Ibero-American Theater Festival 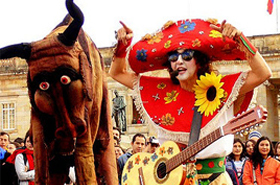 The festival was created in 1988 by actress Fanny Mickey and playwright Ramiro Osorio, and launched as part of the 450th anniversary celebration of the founding of Bogotá.

The purpose of the event is to display the diversity and plurality of the various genres and trends of scenic arts in the world.

This novel purpose has had a direct influence on the growth of understanding and tolerance between peoples. The festival has also fostered a boom in artistic development in Colombia.