Barranquilla: much more than a carnival 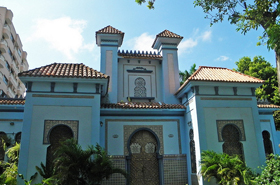 Barranquilla is more than a carnival, like Liverpool is more than the Beatles. Both cities, an ocean apart, have a lot in common: an affinity for the sea, a river and a port, which for centuries has brought people together.

Located where the Magdalena River flows into the Caribbean, this Colombian metropolis is booming. From skyscrapers, which loom above the tropical lowlands, to the open-air shopping centers brimming with fancy shops, Barranquilla is as much about business as it is about boutiques.

A short drive from the town center, the visitor can stroll down the old pier at Puerto Colombia where during the 1890s thousands of immigrants from Europe and the Middle East disembarked in search of new opportunities. The red brick railway station once administered by the Barranquilla Railway and Pier Company (founded in London in 1887) is Colombia’s equivalent of Ellis Island in New York.

With more than a million inhabitants, Barranquilla is the beating heart of the Colombian Caribbean and a city, which throughout the centuries, has reached out to the world.

It is therefore no surprise that today Barranquilla is a cultural melting pot where the tourist can find dishes from around the world, cooked with the same passion and authenticity as local seafood cazuelas and coconut rice. Nowhere is this fusion of style more evident that at Maília restaurant and gallery. Run by María Emilia Hazbún, Maília offers dishes such Arroz Saigon with grilled shrimp glazed in soya sauce and garnished with crispy plantain.

Maília is just one of many restaurants which have burst onto Barranquilla’s gastronomic scene recently, making it an attractive destination for travelers looking for a fine dining experience while taking in the city’s historical landmarks. 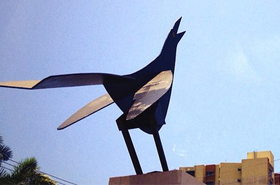 For most of the last century this port city was home to some of the most important artists in the country, such as Nobel laureate Gabriel García Márquez. Alejandro Obregón illuminated the arts scene from Barranquilla with his paintings. Photographer Nereo and primitavist Noé Leon were also regular members of the so-called ‘Grupo de Barranquilla’ movement, which gained legendary status not only for being on the avant-guard but also for the bohemian nights which transpired at La Cueva. As the artists moved on, La Cueva continued and now captivates the imagination of its guests with its food.

Set in modest building near the Old Prado neighborhood and with a brightly lit dining room and an outstanding decor, La Cueva is a must do when in Barranquilla. The menu offers some of the best traditional dishes from the region such as the steamed crab legs, filets of sea bass and red snapper. All this accompanied by an extensive wine list and refreshing Aguila draft beer while your eye wanders across paintings by Juan Antonio Roda and an impressive mural by this country’s very own Henri Rousseau: Neo León. 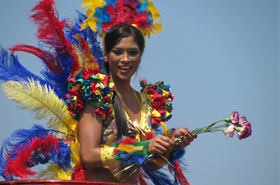 Barranquilla has inspired the words of great writers and is a city known by many names. Locals refer to it as ‘La Arenosa’ due to its sandy riverbanks. The immigrants who disembarked here from clippers embraced it as the ‘Puerta de Oro’ or Colombia’s golden gate. But it is theCarnival de Barranquilla, one of the oldest in Latin America and proclaimed by the UNESCO as one of the Masterpieces of the Oral and Intangible Heritage of Humanity, which turns Barranquilla into the city of ‘La Curramba’ and the late night rumba, or revelry.

Although the carnival runs during the days leading up to Lent, the festive spirit of the Barranquilleros lasts all year long. Just step into one of the many fashionable restaurants and bars along the Carrera 53, such as Naia, for a leisurely lunch and you’ll find yourself chatting up new friends over chilled lychee martinis and a platter of deep fried calamari. Hospitality is one of the city’s most endearing features.

For those who like to measure hemlines rather than waistlines, Barranquilla is also a shopper’s dream come true. Modern malls such as the Buenavista and Country Plaza beckon with their spacious shops while more exclusive boutiques by leading designers such as Beatriz Camacho, Judy Hazbún and Silvia Tcherassi operate out of beautifully renovated Republican-style houses and smaller open shopping centers like Las Palmas. For Francesca Miranda, a leading fashion designer, Barranquilla and style are synonymous. “People here want to look beautiful”, she says.

But beauty in Barranquilla is more than skin deep. It can be seen in its buildings and beautiful architecture. One of the most imposing buildings is the Catedral Metropolitana with its larger than life sculpture by Arenas Betancourt. A quick walk from the Cathedral is another important landmark, the Casa de Carnaval, where dancers and musicians go over their repertoires months before the start of the celebrations.

The port has made this city an important commercial and trading center.

For an evening of culture and music there is the theater Amira de la Rosa, with its imposing façade. For an appreciation of the finest Republican style is the old Customs building, La Plaza de la Aduana and the palm-lined El Prado Hotel.

Barranquilla is best enjoyed outdoors and its proximity to the coast offers the visitor not only stunning views of the Caribbean from look-out points such as the Salgar Fortress, but also beaches for swimming and surfing. For the avid golfer several clubs with stunning views of the sea and challenging courses are open to guests such as the Club Lagos Cuajaral and Country Club.

The passing of time has been kind to Barranquilla. Despite its drive to modernity, the city preserves an air of elegance and the glory of the former days. As one walks among the flowering tamarind trees and the Art Deco homes of its neighborhoods, history is ever present. And so too the majestic Magdalena. Take in a sunset in Las Flores or the local fishing club (Club de Pesca) with gulls hovering in the skies above and you’ll be transported to a place where dreams come true and every day is a celebration. This is the magic of Barranquilla. A city where the river meets the sea.