To get to know one of the most incredible places in Colombian geography, we embarked on a tour of Parque Nacional Natural Los Nevados on a rather unconventional means of transport for this altitude: a bicycle or burrita(little donkey), the affectionate name given to these steel horses.

The Kumanday, or Ruiz Snow Peak, rises to an altitude of 5,321 meters above sea level.

The meeting point for those who allowed themselves to be tempted by the majesty of Los Nevados Park, located at the heart of the "Eje cafetero", or Coffee Region, was a restaurant on the road to Villeta.

At seven in the morning, with a contented belly and a full heart, we continued on our way, crossing beautiful villages, and turned left once we crossed Fresno, the main entrance to this magical Colombian site.

There, El Kumanday, as the Ruiz Snow Peak is also called, rises with vigilant eyes to 5,321 meters above sea level.

After filling our lungs with pure air, taking mental pictures of the place, and continuing to believe that “Colombia is Passion”, all the members of the group, twenty six in total, continued our ascent to Arenales, the site that awaited us for setting up camp.

The Ruiz Snow Peak is also known as El Kumanday.

The bone-chilling cold is forgotten by the simple fact of thinking that the following day the bicycle journey will require a strenuous effort to reach El Caballete, at 4,600 meters above sea level, the site where one arrives after performing the famous zigzag.

The day cleared up magically to let us admire the imposing Ruiz Snow Peak. Juan Diego, our great friend and mountain guide, describes his love for the park he has been visiting for a long time. The fact is that this is a Colombian site capable of leaving any national or foreigner breathless, even more so if the trip is done by bicycle. The day was just beginning, and we felt full of energy, life, and joy at the prospect of traveling on our burritas along the paths signaled by the rangers from the National Parks Unit.

Frailejones (Espeletia grandiflora), fog, brooks, and even the Andean condor make themselves present during this magical two-day journey that undoubtedly exalts the spirit, strengthens the soul, and fills us with the pride of having available programs like this one. Activities that may be carried out in a country with thousands of stories to tell and good people who believe in Colombia. And that Colombians and “Colombianized” foreigners who live here can make happen. 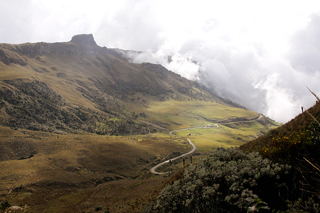 After covering close to fifty kilometers on trails and roads, we arrived at the hacienda where residents and workers awaited us with a spectacular bandeja paisa (typical dish consisting mainly of beans, rice, ground meat, and avocado). The warmth of the local hot springs comforted us and prepared us for facing the last day of descent across fertile lands replete with kind people. A 150-meter tall waterfall made its way through the fog and amazed us with its grandeur, the roar of its waters feeding the yucca, bean, and corn crops of the zone.

At 10:00 in the morning, we began our descent to Villa María, a village known for its chorizo sausages. A canyon, full of patches of crops and imposing waterfalls left us open-mouthed with amazement at its beauty, while we overcame the obstacles the road posed to our bikes. Finally, Villa María opens its arms to this group of adventurers who decided to put aside the din of the city to encounter the silence of the mountain and descend it on their burritas.