The city of Medellin will be hosting the annual flower festival this year between August 3rd and August 12th.
This is the biggest cultural event in Medellin, and one of the most unique festivals in the country. For one week, the city welcomes people from all over the world to celebrate the beauty of its flowers and the diversity of the country. 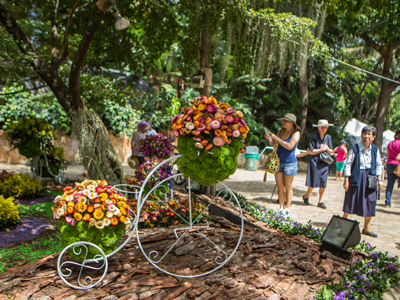 The flower festival was created mainly to honor the growing floral industry in Colombia. The floral industry is not only one of the biggest industries in the country, but also because flowers are seen as a tribute to women, to fertility and to life itself.  This festival has been considered as the most emblematic celebration of the city over the years, and it is regarded as a local and historical icon in the country.

The first edition of the festival took place on May 1957, and it was known as “The flower party”. Originally, the festival lasted only five days, and it was seen as a regional attraction; however, it became a national celebration throughout the years. Nowadays, the flower festival attracts international attention and tourists from all over the world. It brings people together to enjoy the music, the culture, the flowers and the lifestyle of people in Medellin, which is also commonly known as the city of eternal spring.

There are many different traditional and cultural events that you can enjoy during the festivities such as a horse fair, an old cars parade, a dog parade, and musical and cultural platforms around the city. Tourists will also enjoy the national “trova” festival, which is a singing competition where two singers have to improvise verses in a duel, and other sophisticated social events, fireworks at the opening and closing of the festival, open-air concerts and expos.

The festival ends with the Silleteros Parade, which is an event where the local flower growers march around the city carrying unique flower arrangements on their backs. Those arrangements are designed by them, and they can weigh up to 70 kilos and measure up to five meters. All of the flower arrangements are made with a variety of the most unique and exotic Colombian flowers.  The “Silleteros” parade is considered a cultural heritage in Colombia, and it is a perfect opportunity for you to experience how creative Colombian people are and how contagious their good vibes are.