From February 25 to March 5, 2010, Cartagena will become one enormous screening room to celebrate the 50thCartagena International Film Festival. It is the oldest film festival in Latin America. This year, the guest of honor is Spain, and so Carlos Saura, the renowned Spanish director of movies such as “The Delinquents” and “Weeping for a Bandit”, will be in attendance.

The Cartagena International Film Festival is the largest of its kind in Latin America.

This year there will be a change of setting. The inauguration will be held in the Plaza de la Aduana, which is spectacularly decorated by the colonial facades of the old city of Cartagena de Indias that have made the city famous worldwide. Cartagena will confirm its position as not only a tourist destination, but also a cultural one.

In 1960, the Cartagena Theater held the first Festival and in 1976, it was decided that the audiovisual display and competition would be for the whole of Latin America. It consequently became the largest and most relevant celebration of film on the continent.

The film selection criteria require that the movies shown look at the cultural diversity of the participating countries, as well as judging the audiovisual aspect of the movies. Attending the festival means immersing yourself in culture, in different Ibero-American emotions, to make the journey to the Historic City of Cartagena an unforgettable experience.

The films exhibited provide a different view of the culture of participating countries.

Every day this event becomes better known internationally. Tourists will find it an opportunity to do something different and see works of art which they would not otherwise see. Famous celebrities, among them actors, directors and artists from the world of entertainment, will make an appearance on the festival’s red carpet.

The festival is backed by the International Federation of Film Producers Associations – FIAPF - and will be covered by famous Colombian critic, Alberto Posso Gómez. 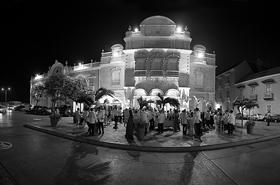 One of the main attractions in Cartagena is the architecture that encompasses colonial, republic and modern times. Its Old City was declared a World Cultural Heritage Site by UNESCO in 1984. Inside are the Palace of the Inquisition, the Castle of San Felipe de Barajas and the Clock Tower.

The city's touristic boom has increased the number of restaurants and expanded the range of cuisine on offer. This, combined with the excellent hotel infrastructure, means there is something for every taste and budget. Many of these restaurants are around the Plaza de la Aduana, which provides a beautiful and elegant setting.

Aside from watching the films, diving, shopping and tasting the cuisine are great activities in Cartagena.

Another popular plan is to enjoy the Beaches on BarúIsland or the Islands ofRosario and go diving in their waters, full of beautiful corals and colored marine species. You can also combine this with a day of shopping in the commercial sector of Bocagrande, in the city proper.

The beauty of this city in the Colombian Caribbean and the variety it offers tourists led media such as the New York Times and the site Hostel World to consider it one of the must-see places for travelers in 2010.