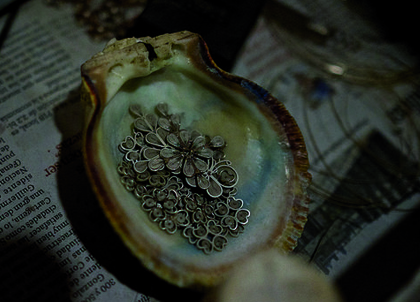 Mompox is known on the world map for its fine precious metalsmithing, especially for its filigree art. When strolling along the streets of Mompox, the navel city of the Magdalena River, it is impossible not to hear the tapping of hammers. It’s the jewelers, or rather the artists, who are manufacturing exquisite filigree weavings in their shops.

It seems that time does not pass in Mompox. For centuries, and by virtue of their work, metalsmiths have preserved the fame of a city that is as beautiful as the exquisite jewelry it produces.

During the Spanish conquest, the famous quintaje operation was performed in Mompox. It meant that one fifth of all the gold collected was sent to the Spanish Crown. Mompox filigrees are very high-quality crafts made with fine gold threads. Silver is more commonly used in the present day due to the scarcity of gold

On the other hand, the permanent traffic with gold mines throughout the Colombian territory had Mompox as its center. The gold was stored here while awaiting the arrival of the Spanish galleons because the distance from the coast made the city a haven safe from pirate attacks.

The excess gold was a stimulus to the metal and silversmiths of the Iberian Peninsula. They soon arrived in Mompox bringing with them knowledge of techniques learned from the Arabs centuries earlier.

Thus was the beginning of the momposino artisans and metalsmiths whose jewelry has colonial roots evidenced in the European (Spanish, French, and English) techniques and ornamental forms, an important Arab contribution and the autochthonous features of these lands – jewelry that has graced the necks, hands and ears of people from all over the world for several centuries. 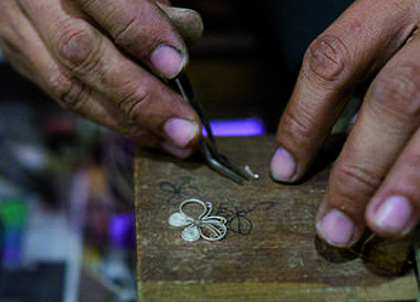 Mompox jewelry is characterized by the use of the filigree technique; that is, work in miniature dimensions. Mompox filigree work produces handicrafts of very high quality with fine gold strands following the process of stretching, twisting, and flattening metal.

The basis of the filigree is gold filament, a symbol of the city’s identity. Just about anything an artisan can imagine and conceive can be made from these strands of gold. It all depends on his or her creativity, sensitivity, and manual skills.

Nowadays, Mompox filigree work is more geared to silver due to the scarcity of gold and the option of making the work more popular. Gold jewelry is made only by request.

Each artist and each workshop have their own style, which is easily recognizable by colleagues. The most characteristic designs fall in two groups:

Both groups are used separately or in combination for the frame or for the body.

The most beautiful exemplars of old metalwork can be admired during the world-famous Holy Week celebrations in the city. During that week, the figures of saints carried along the streets of the city show off the precious jewels that the families to whose care they have been entrusted have guarded for several centuries.