Neiva
26 °C
This block is broken or missing. You may be missing content or you might need to enable the original module.

La Tatacoa Desert, the second largest dry area in Colombia after the desert of La Guajira, is one of Colombia’s most attractive natural landscapes. It covers an area of 330 km² of gray and ochre soil interrupted by the green of the cactuses.

La Tatacoa, or “Valley of Sadnesses”, as it was called in 1538 by Conquistador Jiménez de Quesada on account of the deterioration he observed, is not exactly a desert but rather a tropical dry forest. The name “Tatacoa”, was also given to it by the Spaniards in reference to rattlesnakes, not to the inoffensive black snakes found there.

According to scientific discoveries, during the Tertiary Period, La Tatacoa was a garden with thousands of flowers and trees that gradually dried up until it became a desert.

La Tatacoa continues to be harbor life thanks to the April-May and October-November rainy seasons, which evoke its past of a green, leafy garden, full of flowers, and species of birds singing in the trees.

How is the landscape?

Quite a lot of erosion has taken place in La Tatacoa and relatively little animal and vegetable life was able to adapt to the scant humidity and the high temperatures. We can find wildlife like turtles, rodents, snakes, spiders, scorpions, eagles, lizards, and ocelots that share this land and hide among cactuses that may reach heights of four to five meters.

The plants in the area adapt to the climatic conditions by developing 30-meter long horizontal roots and 15-meter vertical roots that allow them access to water.

The area is very eroded and crossed by dry canyons that develop temporarily during the rainy seasons. These mysterious shapes are created over surfaces of clay and generate mazes of gullies that can reach depths of 20 meters.

What to do in the Tatacoa Desert?

La Tatacoa Desert enjoys a privileged geographic location at latitude 3º13' north and longitude 75º10' west, not far from the equatorial line.

From there, it is possible to:

La Tatacoa skies are cloud-free most of the year. 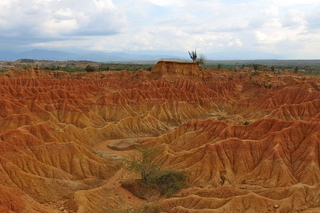 Aside from having perfect geographic and atmospheric conditions for the observation of celestial bodies, La Tatacoa has no visual or auditory pollution. This attraction greatly captures the attention of tourists who stop over to enjoy the scenery and its peace and quiet.

You may be interested in: 5 places to experience glamping in Colombia

For these reasons, the desert receives a great many visits, especially from paleontologists and geologists for whom it is a research paradise.

Some people say that the temperature in La Tatacoa Desert is so high that it is possible to cook an egg buried in the sand.

A good reason to remain in the department of Huila after the conclusion of the National Bambuco Pageant is the Tatacoa Star Party.

The event is geared to astronomers, scholars, scientists, and students, as well as to amateurs in astronomy and celestial bodies. “Star Party 2009 will be an excellent opportunity to discover the sky, observe the two celestial hemispheres, and watch the Scorpius, Sagittarius, Virgo, Centaurus, and Cygnus constellations, among other phenomena,” points out Astronomer Javier Rua. 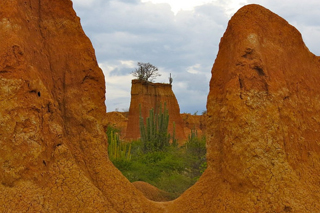 Likewise, upon the occasion of the International Year of Astronomy, and aside from the observation of the heavens, talks, conferences, and recreational and academic activities related to astronomic sciences have been scheduled.

There will also be ecological hikes in El Cuzco and Los Hoyos sections of the desert, as well as tours of the municipality of Villavieja and its Paleontological Museum.

You may be interested in: Sierra Nevada de Santa Marta Natural Park: land of wise people