Cartagena de Indias
27 °C
This block is broken or missing. You may be missing content or you might need to enable the original module. 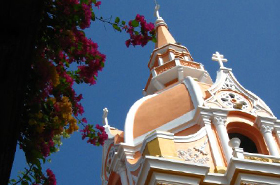 The inhabitants of Cartagena do not say it. Neither do the Colombians. The world and Frommer, one of the most important US tourists guides say it. Frommer recommends Cartagena de Indias as one of the top 12 world destinations to visit in 2009. It is the only location in Latin America on the recent list issued by this influential publication, which international tourists take into account when it comes to planning their vacation.

All those who know this city of the Colombian Caribbean are aware of the reasons for coming. With all the international recognition and tourism prestige of this destination, recommendations and good references on Cartagena abound; on each trip there will be something new and enough reasons to return to this UNESCO World Heritage Site.

Throughout the years, world personalities have visited Cartagena and marveled at its historical, cultural, architectural, trade, and nature values. Bill Gates, Pope John Paul II, the King and Queen of Spain, Mel Gibson, Bill Clinton, Christopher Lambert, and Miguel Bosé, among many others, have vibrated with the city’s magic, which captivates even the most unprepared traveler.

Other famous personalities, not satisfied with enjoying the “Heroic City” only during their visits, decided to have a place of their own in the “little stone corral”. Gabriel García Márquez, Juanes, Shakira, John Leguízamo, and Julio Iglesias are fortunate to have a house there, a space reserved for arriving whenever they want to and letting themselves go into the fascination of this walled destination. 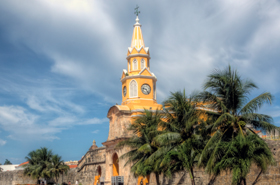 Yellow represents the Convention Center and the large infrastructure provided by the hotels that make the city the seat of events, congresses and encounters of businesspeople, chiefs of state, and intellectuals, who do not skimp on words of praise for this Caribbean pearl that hosts the Macondo world recreated by our Nobel Laureate Gabriel García Márquez. And the city is red for the passion that flourishes in lovers who ratify their bond in churches and within the frame of its old walls or who they choose Cartagena for their honeymoon.

Thousands of tourists and sailors who disembark from the cruise ships that arrive in the city for an average duration of 8-hours at the wharfs of the Sociedad Portuaria are able to enjoy a good part of Cartagena’s attractions. During the 2008 season, the arrival of large tourist ships increased by 80% when compared to 2007 - from 76 to 137 boats. For the 2009 season, 143 ships carrying over 272,000 passengers and close to 114,000 crew members are expected.

Thousands of people disembark from international cruise ships, yet movement at the land transportation terminal and the Rafael Núñez International Airport is also permanent. Year round, thousands of people want to get to know even the details of the first port of the wonderful world of Macondo called Colombia.