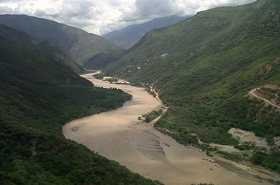 The Chicamocha Canyon, nominated in the contest to select the new seven natural wonders. Photo by: Andrés

The Chicamocha Canyon is a Colombian natural attraction now part of the group of 261 destinations in the campaign to select the top several natural wonders of the world. This paradise-like place is a not-to-be-missed visual spectacle.

Imposing, majestic, and fascinating is how tourists describe the Chicamocha Canyon, a geographic accident located in the department of Santander, not far from the city of Bucaramanga.

The Chicamocha Canyon, the result of a geological accident, is bathed by the river with same name

The temperature in the canyon fluctuates from 11°C to 32°C from day to night. It is extremely dry, and vegetable covering is scant, almost absent. It is located just 54 kilometers from Bucaramanga by car at an altitude of 1,450 meters above sea level.

The Chicamocha River runs along the bottom of the fault to join the Fonce and Suárez Rivers and further on, the copious Sogamoso River. It is 227 kilometers long. With a depth of approximately two kilometers, this canyon is deeper than the famous Colorado Canyon.

This beautiful place is home to the Chicamocha Natural Park, which offers visitors contact with nature and extreme amusement in its 264 hectares.

The Chicamocha National Park: a tribute to Santander pride

In December 2007, in the heart of the canyon, the Chicamocha Natural Park opened its gates. Among other sites, the following stand out:

The Monument to Santander Pride: 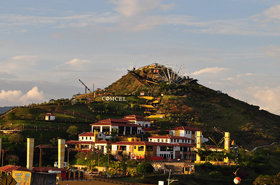 This work of art commemorates the popular revolt known as the “Revolución de los Comuneros”. It is an enormous leaf with 35 sculptures on top, the main one being independence heroine Manuela Beltrán. The artist was Master Guillermo Vallejo.

The Chicamocha National Park is made up of several plazas, each one representing outstanding spaces in the daily lives of the inhabitants of the department of Santander. Among them are Plaza de las Banderas, Plaza de las Costumbres, and Plaza del Comercio, with flags, customs, and trade, respectively. The Exhibit Hall where artists from the department show their works is located in this area. Last, there is Plaza de las Hormigas, or Plaza of the Ants, so called because people “look like ants” when observed from the distant Monument to Santander Pride.

The main feature of the park is to be a home to an unusual animal species. The gigantic birds, their way of life, their eggs, and all their derivatives may be admired here.

Adrenaline and adventure in the Chicamocha National Park

This is one of the park’s great attractions. There is a total of three lines. The first one, at the back of the park, is 450 meters long and allows the observation of the whole canyon. The second one is the lookout zipline, shorter, but providing vertigo and thrills. The third one is for children.

Lovers of extreme sports may tour the incomparable landscapes of the Canyon at an altitude of 1,554 meters. Flights are done every day from 9 am to midday, provided you schedule your flight in advance.

A fabulous tour of the Chicamocha River, with nature and rapids in any route you select and with the park as the final destination. The price varies according to the number of people and the route selected.

A one kilometer track for those inclined to speed and thrills.

Another way to marvel at the stunning beauty of the Chicamocha Canyon is to fly over it by helicopter. 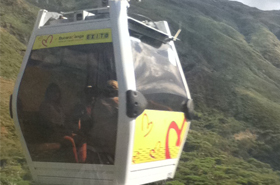 Aerial cable car that crosses the Chicamocha Canyon from one end to the other. Photo by: Hernan Duran

A 6.3 km-long aerial tramway with 38 cabins and 3 stations, which crosses the entire Canyon was inaugurated in January, 2009. 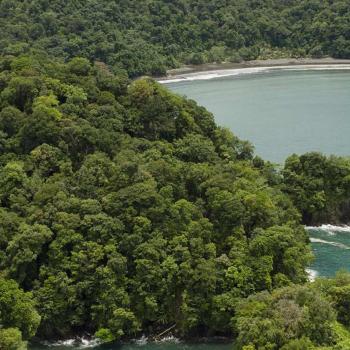 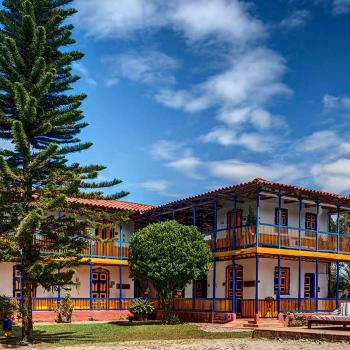