A charming destination with parks and more

In the capital of the department of Santander, you'll enjoy a pleasant weather that stays around 77 degrees Fahrenheit all year long. The luscious green of this city's many parks give it a distinctive feel. In fact, Bucaramanga is known as the "City of Parks."

Bucaramanga is also characterized by the selection of hotels it offers, which cater to the tastes of different travelers. All of these factors, in addition to the city's commercial and industrial activities, make Bucaramanga an excellent business destination in Colombia.

What is there to do in Bucaramanga?

Like we said before, Bucaramanga is known as the "City of Parks," so we highly recommend taking a stroll through a few of them while you're here.

Bucaramanga's most noteworthy parks include Parque Centenario, which is the heart of the city's cultural and commercial development; Romero Park, a place of great historical significance; and Parque Santander, which just might be the most important park in Bucaramanga thanks to the economic, historical, and commercial significance of the buildings that surround it.

In addition to its many parks, Bucaramanga has many other places of interest for tourists, such as the Cathedral of the Holy Family and the Capilla de Los Dolores, which is the oldest temple in the city and is a prime example of the cultural heritage of the Republic of Columbia.

Another important place you can visit in Bucaramanga is the Centro Cultural del Oriente (Eastern Cultural Center), which was declared a National Monument in 1995 and currently provides valuable cultural services for the city.

In Bucaramanga, there are many different events you can attend, such as the Feria Bonita, which is celebrated in September and has free cultural activities for all ages.

One very popular festival celebrated in Bucaramanga is Abrapalabra, which brings together storytellers, musicians, poets, minstrels, singer-songwriters, composers, oral narrators, comedians, and dancers from around the world.

The International Film Festival in Santander, where new cinematic trends from around the world are celebrated year after year, is another event you won't want to miss out on. One thing that makes this event special is its focus on cinema workshops for children and the general public.

In the outskirts of Bucaramanga, where you will find crops of tobacco, cacao, pineapple, corn, and other crops, you can participate in different adventure sports.

Those who visit this Colombian city nestled between the mountains can feel the thrill of participating in activities such as paragliding, rafting, and rappelling.

Paragliders enjoy an exceptional, panoramic view of Bucaramanga and its metropolitan area. The place is perfect for enjoying the beautiful sunsets at the end of each year, whether from a diner or while gliding through the air.

That way, you can fully enjoy the charms of the "City of Parks" and the vibrant beauty of the rhythm by which Bucaramanga is characterized. We hope to see you very soon!

Is the most beautifull park at Santander, the unique landscape,friendly staff AND attractions for all.

"Lots of Paintings, Recordings on some of the Hallways and Paintings; and they have Musical Performances,
What I absolutely do NOT understand either accept, is WHY, the local transportation authorities have their ""offices"" inside this place; which is NOT for handling high demanded transactions, related to transportation issues and taxes.
They should look for some other place to handle it, and stop having this place crowded with mad people, waiting to be attended, and complaining about whatever they are asked to pay (Tax, Fees, Tickets, etc)."

"Guillermo Sorzano González, in honor of one of the best mayors that the Santander capital has had, is the true name of the San Pío Park. At the end of the 50s, at the initiative of the rich inhabitants of this sector of Cabecera, it was decided to adapt it, in lands of the Puyana family. In 1964 it was inaugurated officially and 5 years later the urbanizadora of David Puyana the writing and donated to the municipality.
There is a bookstore, playgrounds, many chicken trees and sighting of songbirds.
And on the eastern side is the church of the sainted saint. Venga!!"

This church is famous for pilgrims in the past. It is situated in a charming town of Giron which is 9 km south of Bucaramanga. It is warmer here because it is found in the deep valley. The town is 500 years old with whitewashed colonel buildings and cobbled streets.

One of the nicest cathedrals in Bucaramanga, probably the biggest. Nice architecture, it's maintained by the Jesuits community, it's located by the side of the San Pedro Claver School. There's a parking in the block. Best to visit by the sun hours to appreciate its architecture. Check service hours first. 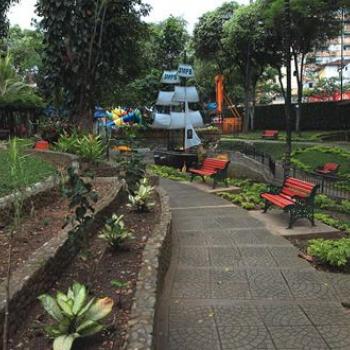 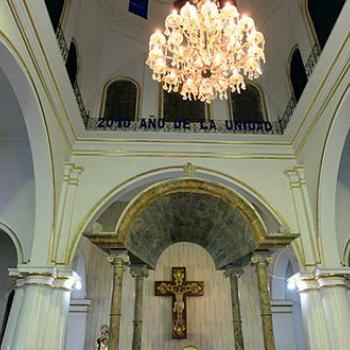 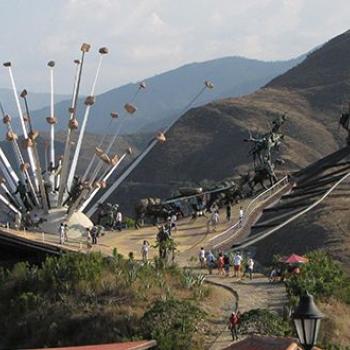 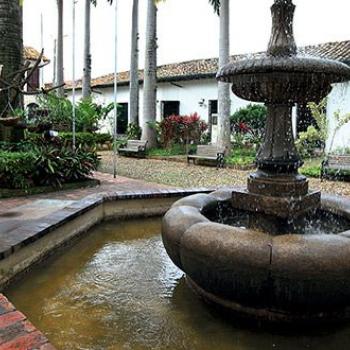